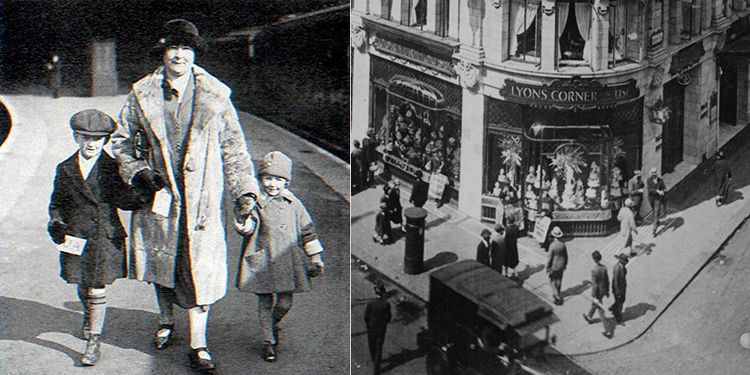 One of the things I love about producing Spoken Portraits is learning about how different things were in the past. Often, these discoveries come from the little details of a bigger story.

So it was with ‘Universal Aunts’. I was talking to someone about his childhood during and after the war. We got onto the subject of his education, and the fact that he went to boarding school on the south coast from the age of seven. During that period the family lived in various parts of East Anglia and Scotland for the father’s work in the Navy. How, I asked, did he and his brother find their way across the country at the start and end of term?

He answered that, if his mother were not able to travel with them, the boys would take the train to London by themselves (hard to imagine young boys travelling alone these days!). They would be met off the train either by one of their ‘real’ aunts who lived in the capital or by a ‘Universal Aunt’. Being an aunt myself with lots of children in my life, I was tickled by the idea of a Universal Aunt. He explained that ‘UAs, as they were always referred to, were comfortable aunt-like people who were there waiting on the station with a visible notice saying UA. They’d take us across London to meet the School Train [two carriages at Waterloo reserved for the returning pupils] stopping at a Moo-Cow Milk Bar or a Lyons Corner House for something to eat.’

I later did some digging on the internet. I found out that Universal Aunt was the official job title for employees of the Universal Aunts company who could be engaged to look after unaccompanied children. The business was established in 1921 by Gertrude Maclean, who herself had looked after her nieces and nephews during the first world war while her siblings were serving overseas. When the war ended and they returned to England she found herself redundant and, like so many women of her generation, unlikely ever to marry due to the huge number of men who had died in the war. Her brilliantly ingenious response to the situation was to make a business out of the business of being an aunt and help out other children whose parents were serving in the armed forces or away working in the colonies.

I was intrigued to learn that the Universal Aunts company still exists today. Their duties have expanded with the times to cover caring for older clients, pet sitting, house sitting and pretty much anything else their clients need help with. And, of course, they include women with families of their own as well as a good number of men.

Do you have memories of being looked after by a Universal Aunt? I’d love to hear other people’s recollections.

London A to G on BBC Radio Life was much slower